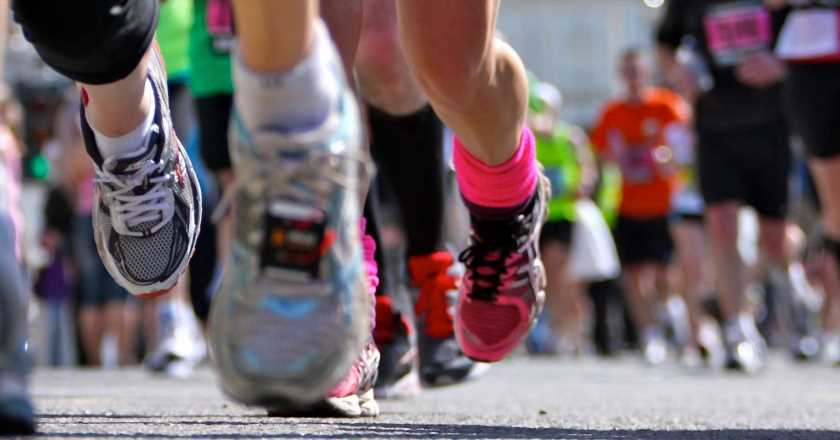 With the London Marathon and other races just weeks away, it’s time to focus on staying cool and collected. Here’s what Strong Women editor Miranda Larbi wishes she’d known before running her first race.

It’s almost the end of September and that can only mean one thing: the London Marathon, the Royal Parks Half Marathon and other long distance running events are just weeks away. In a matter of days, 100,000 of us will canter across Tower Bridge, down Wapping High Street and past Buckingham Palace to raise money for our chosen charities.

There was a time when marathons were only really attempted by elite athletes and Greek messengers. Today, more and more of us are putting ourselves through months of gruelling Sunday long runs so that we can schlep around the streets of London, Paris, Berlin, Boston and New York.

You don’t have to be an incredible runner to do one; most of us simply find ourselves carried away by the atmosphere the year before and foolishly enter the ballot never dreaming that our number would get called out. And sometimes, it’s the call of a chosen charity that has us lacing up our trainers when it’s humid, dark or wet outside. This year, thanks to Lucozade Sport, I’ll be raising money for Action Aid as I navigate the iconic 26.2 mile course.

If you’re running the London Marathon or any other big race this year, here are 12 tips for making the most of race day.

“How strength training made me a radically faster marathon runner”

Don’t you just hate people who tell you to relax when you’re faced with genuine stress? Running a marathon is incredibly stressful but it really is worth working on how you can process that fact ahead of time.

When I ran my first marathon in 2017, I was convinced that I was going to die or shit myself on the road. I was overwhelmed with pain and couldn’t understand how my body was still running. At the end, I just managed to grab my medal before lying in a heap under a Jewish Aid tent where my mum eventually found me. Fast forward two years later and due to various medical issues, I turned up to the start line of the Loch Ness Marathon woefully unprepared. I’d only managed to get up to around 17 miles on my long run and had taken two months off altogether in the run up to the event. I beat my first marathon time by 30 minutes.

It wasn’t that I’d trained harder or smarter; I’d gone into the race happy and grateful to be there – vowing to drink in the sights and to totally ignore the timings. “Zero pressure, zero expectation” is such a powerful mantra and one that’s worth meditating on even if you are going after a certain time.

Start without your headphones

The electric atmosphere is why many of us sign up for these kinds of races. If you have your headphones in the whole time, you’ll miss the opportunity to soak in the cheers, chats and music coming from all around you. It’s also easy to become bored if you’re listening to a playlist for hours on end.

Marathons are also great opportunities to meet other people. In my last race, I ended up running with a bible translator (who I eventually had to run away from) and a group of guys celebrating their mate’s divorce (who I met again at the airport some pints later).

Plan for podcasts then playlists

Saying that, many of us do need distracting and entertaining on the road – especially if you trained with your headphones.

In my first marathon, I got to five miles before plugging in and then listened to music until I reached the finish line. I couldn’t distract myself from the running. In my second, however, I kept the headphones off until well into mile 10 when I started listening to a line-up of engaging podcasts. It was only at mile 18 that I decided to put on my marathon playlist and that gave me a huge motivational boost when I needed it the most.

Think of music a bit like coffee. If you don’t drink a tonne of coffee, one or two espressos are going to make a huge difference to how alert you feel; if you drink five cups a day, it becomes hard to notice its effects.

Run in your favourite kit

It goes without saying that by the time you get to the start line, you should have worn your race day kit on at least a couple of long runs. You’ll regret running in box-fresh trainers or off-the-hanger sports bras, so make sure that your kit is tried, tested and washed to avoid unnecessary chafing and blisters.

Not sure about your trainers? If you’ve been running a while in them and you’ve gone through a marathon cycle in them, they might need replacing. Take them to a running store if you’re worried and have your gait analysed to check that you’re running in the right shoes. If in doubt, why not check out the On London Lab, where you can try on shoes, have your feet analysed and go through running drills? It’s running until 30 August at Protein Studios in Shoreditch.

Practise with snacks and gels

Every child in Wapping will try to hand you jelly babies and slices of orange. The crowd in London is incredible and you definitely will want to cry at their generosity. But if you’re vegan or don’t like oranges, those offers of food won’t do you much good.

Bring your own easily digestible snacks and test them on every long run you do from now until the marathon – especially if you intend on bringing energy gels. Do not try anything you haven’t already eaten during training on race day.

Get the Imodium ready

To avoid any accidents/annoying stop-offs, remember the point about trying new gels on race day and think about taking an Imodium before the race. Trust me, it’s a measure worth taking.

Take on water when you need it

There are water stations every few miles at marathons but don’t think that you have to drink every time you see someone giving it out. Everyone’s different and those stations are readily available to accommodate a huge number of runners; if you drink at every station, you may end up feeling uncomfortable. In the same way, ignoring all the water stations is a really bad idea.

Set yourself a goal of having a drink (or swilling liquid in your mouth) every hour and get used to that in your training. If you need more, take it but having a few weeks to get used to how dehydrated you’re likely to be on race day can prevent headaches, cramps and feeling generally awful.

Some people love seeing their friends and family at the side of the road; others just need the assurance that even if they don’t see their crew, they’re around (if you’ve ever tried to track someone at a race, you’ll know that crews deserve to have their own medals!).

For me, I run best when I don’t know anyone in the crowd until the end. I don’t have to worry about looking out for them, they won’t see me looking like death warmed up, I can run content in the knowledge that it’s just me running for me.

If you do want to have support there, pre-arrange where they’re going to be, what kinds of signs they’ll have and where you’re going to meet at the end. There’s nothing like seeing your mates at the finish line or mile 25 to help you put a spurt on; if you’d rather have an anonymous race, tell them to turn up at the end to collect you.

It might seem like everyone’s running marathons these days but they really aren’t (they say that around 1% of the population has run one – and 33% of that 1% are women). You’re going to want to remember this event for the rest of your life and having a few pictures that aren’t just of you crying before and/or after will help to keep the magic alive.

Of course, marathon running is hard so it might be impossible for you to grab your phone and start snapping but if you can, I recommend trying to catch the odd picture and getting it printed out. It’ll definitely be blurry but at least that’s an accurate representation of the whole event.

Have flip flops ready for the end

When you run for hours and hours, your feet inevitably swell. (Hopefully) you won’t clock that while running, but once you stop and take off your shoes, you really won’t want to put them back on.

Blood flow increases when you run so that more oxygen is delivered to the muscles. That means that the volume of muscles slightly increases – including those in the feet. The result is that your feet may feel and look larger after four hours (which is totally normal). Avoid wanting to chop your feet off post-race by having a pair of flip-flops in your race bag. I like to wear Oofos sandals which are super lightweight, have a built-in arch and are made from recovery foam that absorbs 37% more impact than traditional footwear materials.

Give yourself time to recover

I’m not a huge beer drinker but there’s nothing I want more when running a long race than a nice, cold pint. The devastating truth, however, is that it’s almost impossible to eat or drink immediately after a marathon because your body is so inflamed. You won’t feel hungry or thirsty and you certainly won’t fancy a beer.

You definitely need to take on fuel soon after finishing the run so make sure that you do, even if your body stops giving you thirst and hunger signals. Set an alarm on your phone or pre-warn your cheer crew to remind you to drink plenty of water/Lucozade and eat carb-rich snacks like crisps, cereal bars or bananas.

By all means have a pub or restaurant booked but just be aware that you might feel quite tender at the end so give yourself an hour or so before sitting down to a pint and/or meal.

Remember: the marathon is your victory lap

You’ve trained through sun, wind and rain. You’ve missed pub outings to get up for training the next day. You’ve probably lost sleep worrying about the race. After two or three months of hard work, the marathon is the final piece of the puzzle – it’s your victory lap.

This is the day that you get to enjoy the spoils of that hard work. The hard work doesn’t begin at the start line; it’s the beginning of the end.

Team Strong Women will be running London Marathon 2021 on 3 October. Follow us on Instagram to join us on the day (@StrongWomenUK).