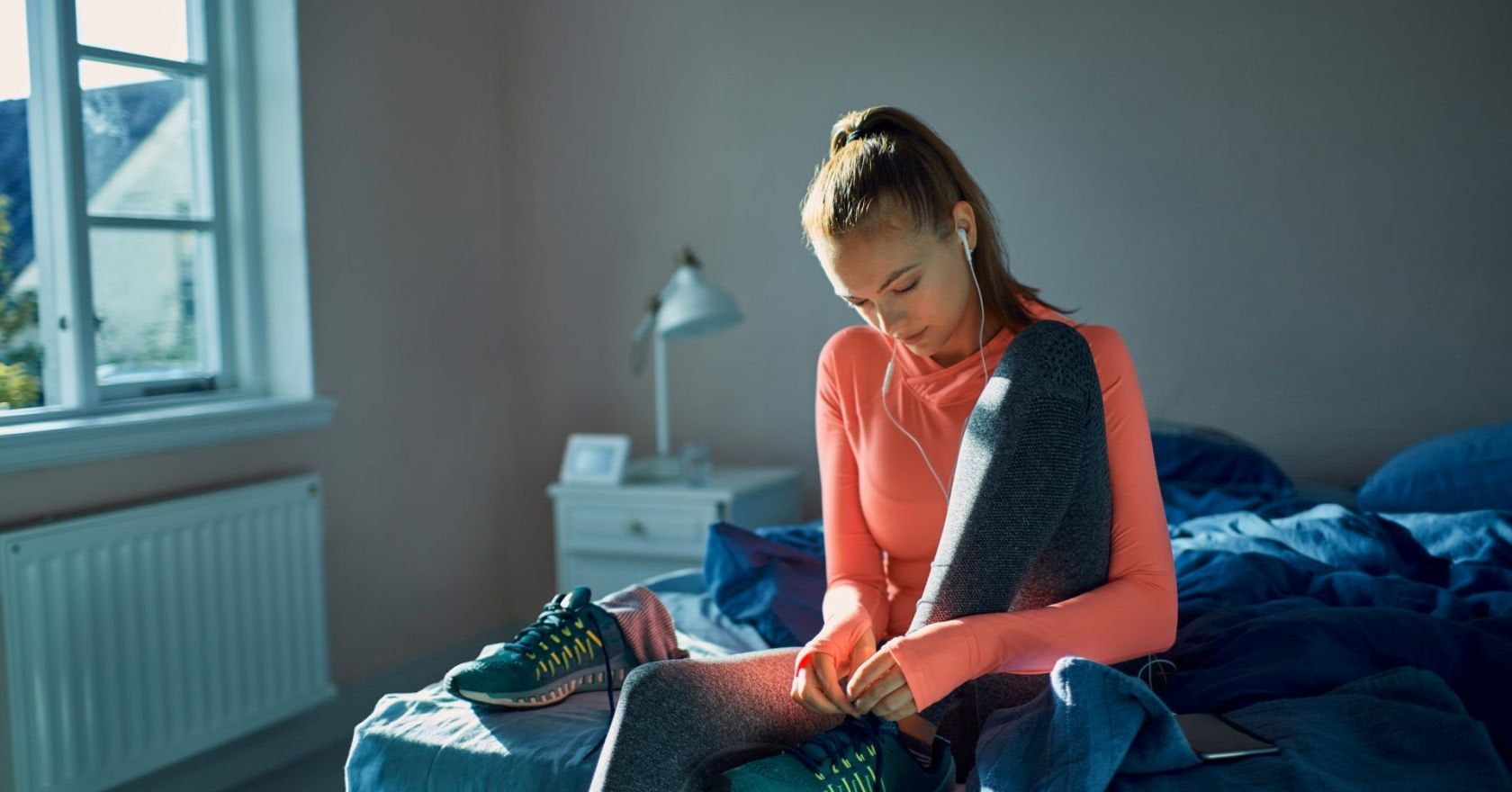 What’s the secret to becoming the kind of person who “does fitness”? Writer Jess Bacon explores whether the key to making fitness a habit is working out at the same time of day or if there’s anything more to it.

This summer is probably the first time in a while that many of us have had to get back into a regular exercise regime. When the gyms closed last March, I scrapped my usual workout routine and went into survival mode. I worked from home, built up my neglected blog and did the odd home workout when I felt like it — but in all honesty, my exercise routine went out the window. 14 months later, I’m only just clawing it back by waking up every morning, writing creatively for an hour before jumping onto my spin bike.

At 7am, I’m rarely motivated to exercise but by blocking out this time before I start my day, I’m beginning to feel the unmistakable urge to move and get that endorphin hit on waking. In the beginning, it’s easy to enjoy exercising again — even sticking out a regular routine for a week or two— but when the novelty wears off, how do we make our new fitness routine stick?

Walking benefits: 7 reasons why walking before work in the morning is so good for your mental health

Make working out as simple as possible

Research has found that people who consistently worked out at roughly the same time every day logged more workouts each week than those who varied their workout time. Those individuals who worked out at similar times each day were also more likely to achieve their full 150 minutes of physical activity per week (as recommended by the NHS).

It seems that while motivation might get you started and an exercise plan may keep you on track, dedicating a period of time each day to movement could be the easiest way to make working out a habit. Despite the myth that it takes 21 days to form a habit, researchers at University College London found when examining 96 people over 12 weeks, it took an average of two months for an individual to form a new behaviour to the point where it became automatic.

Behavioural change expert and author of The Last Diet, Shahroo Izadi, tells Stylist:“If you can create associations, such as after I brush my teeth, I work out and then I have a smoothie, your body will begin to expect the workout… Building associations and routine cushioning isolated habits in other habits makes it easier for your body to do them.”

Habit-stack your way to a fitness routine

Habit-stacking might mean wearing your gym kit all day so that you have no option but to exercise once you’ve finished work, or keeping your mat out ready to hop on at lunchtime.

Following that logic, it’s easier to introduce the new habit of working out at the same time of day if you try to exercise as soon as you log off from work, for example, than changing everything about your daily routine at once. Adding just one new form of movement a day within your current routine could be the catalyst to building your fitness back up again.

Following her own method, Izadi has become a lot fitter in recent years, by forging new habits and a fresh new mindset. And she’s not the only one to benefit from folding exercise into her daily routine in order to make the habit stick.

Leadership development coach and self-confessed Peloton-addict, Karen Whitemore, has found that early morning workouts have helped her stay on track with her fitness regime. “As soon as I wake up, I work out, so I try to plan my day around starting after exercise,” Whitemore tells us. “I just follow my daily routine, starting with putting on the gym kit that I leave by my bed — I’ll fall over it if I put it on immediately!” Karen has formed associations from her bed: she puts on gym clothes and jumps on the bike, sometimes having a protein shake before a long ride. After her classes, she has her baked oats and gets ready for the day.

“I started this habit on 1 January 2021,” she explains. “There was something about it being a new year that made this new change feel right and I have stuck to it. I had previously played around with my exercise routine by working out at different times and certainly not moving every day. Forming a habit has made the difference for me because it has taken away any decision making about if I can be bothered.”

Whitemore has been able to carve out time before a busy day at work to dedicate to her fitness — entirely changing her former relationship with exercise: “I am not an early morning exercise person, or at least that is what I told myself! It took a while for my legs to feel like they wanted to move and for me to get my energy levels right. I have now worked out what I need to drink beforehand and how long I need to be awake first in order to function!”

With over 1,000 workouts now clocked in on the Peloton app, Whitemore has found her stride and is healthier and fitter than ever before due to consistently working out at the same time every day.

Blocking out time for exercise is as essential as planning your workouts for staying on track long-term, says Cathy Brown, former professional British boxer, sporting coach and cognitive behavioural therapist. She tells Stylist that: “It is important to get into a routine with when you train but it needs to flow with your lifestyle as that’s what will make it a long-term lifestyle routine. You should book your training time into your diary like a meeting.”

Be flexible and consistent

Brown continues: “Training has to become part of your life and the best way to do that is to commit to the session that fits around what you do. If you sit at the beginning of the week and plan around what you have on that week, you will be more likely to keep the commitment and train.”

This ritual of assigning time each week to exercise and swapping some early morning workouts after late nights out with family or friends for an evening workout will ensure that you have additional flexibility in your day-to-day routine. “The reason that I believe in being flexible with [training] is if you commit to every morning and you struggle, then mixing up your times during the week means you are more likely to stick to it,” she explains.

It has to be a realistic plan and routine to make it work for your own circumstances, but getting those workouts in at the same time of day on quieter days will help you consolidate that habit. But what happens if you oversleep and miss that designated workout time?

In those moments, Izadi suggests that the best thing to do is adopt a compassionate approach and take some common-sense advice that we’d give to a loved one. Rather than reverting to the ‘all-or-nothing’ way of thinking that might lead you to sack off exercising altogether, try to be rational. “If you miss a workout at the time you committed to, of course you can do it later!”

While working out at the same time of day will build that new habit and help you to get back into fitness again, Izadi stresses that: “The most important thing is to believe in yourself more than the plan. Believe that you have the capacity to be flexible even if you miss that time frame or routine of when you normally work out.”

Ready to get working? Why not try one of the SWTC training plans at the same time of day and see if you can turn training into a regular habit?