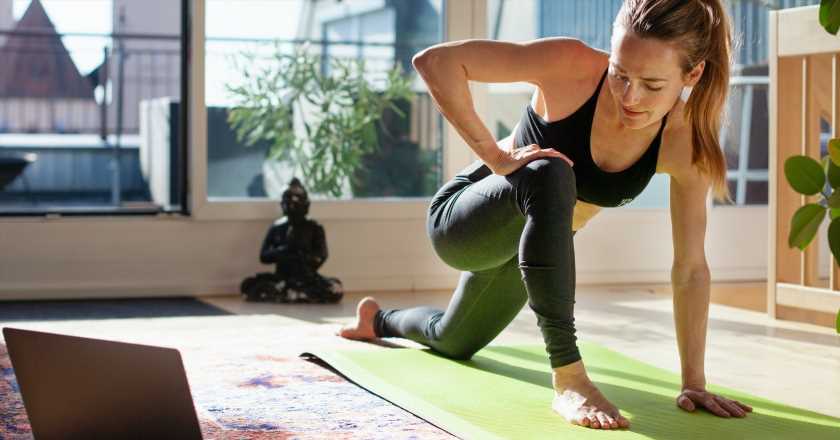 The deep stretches and long-hold poses of yoga are the perfect tonic for sore, tired runners. Here we ask the experts what style of yoga is best for sprinters, long-distance runners and hyper-mobile runners.

Whatever sport you do, you should be cross-training. For runners in particular, taking a day off from pounding the pavement to practise another discipline can not only reduce your chances of injury and promote recovery, but can also help you avoid getting bored.

Yoga may be an intense workout, but it can greatly complement your running habit, because: “It loosens tight spots, strengthens weak areas, and makes you a better, less injury-prone runner. Yoga can also be used by runners to increase their range of motion in areas that can get tight due to the repetitive nature of running,” says Vanessa Gebhardt, mind coach and training specialist at fitness app Freeletics.

And it doesn’t stop there. According to Laura Pearce, yoga teacher and founder of Kin Yoga Mats, adding this movement style into your regular post-run workout schedule will: “really get the juices flowing through those tired, stressed out muscles. Stretching can improve recovery. When we’re in a relaxed state, we drop into our parasympathetic nervous system – the ‘rest and digest’ state – which is the branch of the nervous system responsible for recovery and repair of the body’s tissues. This is the most important part of any cross training programme.”

Each style of yoga has a different objective. Some, like yin yoga focus more on deeply healing meditative practices, while others like vinyasa teach how to use breathe to power your movement. So which is best for the type of runner you are? Read on for the expert answers.

What kind of yoga is best for runners?

There are so many different styles of yoga, and practising any one will help you “reduce muscle soreness, inflammation and boost lymphatic drainage,”  according to Lina Nielsen, professional athlete and yoga teacher at Fly LDN. But, instead of focusing on overall benefits, Nielsen advises runners to choose a style that’s most compatible with their running goals.

Sprinters have to be explosive straight out of the blocks in order to gain momentum as they speed towards the finish line. Nielsen says, “If you’re more of a sprinter then try to avoid doing too many stretch-type classes such as yin yoga. If you do this class frequently, over time your muscles and connective tissue can lose some elasticity which can make you slower; a bit like over stretching an elastic hairband – it won’t spring back as quickly as it used to!”

“I ran before, during and after work for a month and it changed my running regime for good”

During long distance runs your joints endure continuous impact for miles at a time so it’s important to avoid explosive yoga styles such as power yoga, which can further stress overworked joints. According to Nielsen: “Creating length through muscles and connective tissue can help you get longer in your stride which will increase your running efficiency, helping you squeeze out a bit longer from your run.”

Vanessa Gebhardt adds: “Long-distance runners should take caution with any yoga moves that put extra stress or tension on the knees. Running is notorious for creating weakened knee joints, so when doing some poses, be careful to allow your body to move into them rather than trying to force it into those positions.”

It’s estimated that 1 in five people in the UK live with joint hypermobility, meaning they’re on the more flexible end of the spectrum. Although they can get into tricky yoga binds easier than most, hypermobile yogi Laura Pearce says it’s just as easy for them to “overstretch and actually destabilise” joints that need more strength and stability.

“For some hypermobile runners, big stretches and advanced yoga needs to be performed with care. Certain types of yoga where you relax the joints into the pose, should be avoided,” advises Pearce.