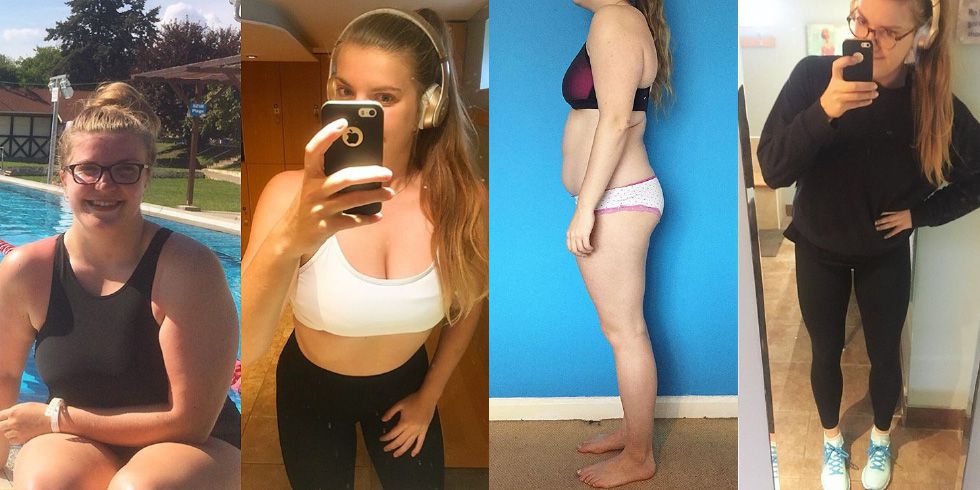 Before I went to university, I was very insecure about how I looked and I never really realised how deeply that affected literally every aspect of my life. I was always second-guessing myself, worrying about what others thought.

But at school, I made friends who were really into fitness, and I started going to the gym sometimes, bolstered by their encouragement.

In my second year, though, I was playing netball when I jarred my back, sending it into spasms. From that moment on, everything was different.

I’d struggle standing for more than 10 minutes. If I went shopping, I’d end up in agony. Even things like getting to the subway and having to stand became too difficult. There were times I’d be sobbing on the floor in pain, with my back muscles in spasms, physically stuck in bed, unable to roll out because the pain was just too much.

When the pain started impacting my studies, I went to see a doctor who took an MRI. He told me I had damage in my spine that might never get better without surgery. Heartbroken and frustrated, I decided to work with a physical therapist first, who gave me exercises to work my core and fix the muscle imbalances and poor posture that was causing my pain.

It did get better, but I was still unhappy with my body and how it functioned.

Eventually, I just hit a wall. I wanted to give up. I’d hit my heaviest weight despite being fairly active, and I was tired of always trying and then quitting workout plans.

Feeling close to defeated, I decided I would give myself one last chance to *really* try.

I can pretty much guarantee if you’d asked the girl on the left if she’d ever post a photo on social media with her belly out she would have laughed in your face ? now here I am a gym lover (the fact I haven’t been able to go for 3 whole weeks literally hurts me ?) who loves to get so sweaty I have to workout with more bare skin ? I feel so much more comfortable in my own skin and that’s gotta be the biggest plus ✅ 3 rounds of BBG mixed with running and LISS. ⬅️ 2015 >95kg. ➡️ 2018 ~78kg. . . . . #bbg #bbggirl #bbguk #bbgsisters #bbgcommunity #bbgprogress #workout #gym #liss #runner #running #weightloss #fatloss #fitness #fitfam #fitspo #fitnessmotivation #fitnessjourney #fattofit #beforeandafter #girlgains #strongnotskinny #selfie #sweat #girlswholift #transformationtuesday #progress #progresspic #kaylaitsines #bodyconfidence

I came across Kayla Itsines’ BBG program through Instagram. I loved that her page featured transformations from girls of all shapes and sizes. I saw girls whose “before” photos looked like me.

Best of all, the workouts were short and the program was for a set length of time. I decided I would commit to getting through 12 weeks of BBG, hitting every single workout, and give up my guilty pleasures (namely chocolate, sweets, and Diet Coke). If putting in my maximum effort for three months didn’t yield results, well, at least I’d tried.

To my surprise, I actually stayed committed. And, after just a few weeks, I started to see changes.

Day one, I could only manage five half pushups; after four weeks, I could do 10. I was becoming less afraid of running, and my times were getting slightly faster. Physically, my stomach was slimming down slightly.

These changes really gave me the drive to keep going. I finished the 12-week program, looked at my progress pictures, and realised I really had lost fat.

I was so proud. But I was also very aware that if I stopped now I would probably just end up back where I started—and I couldn’t think of anything worse than that.

I kept going with the BBG guide, but started adding netball or runs for 30 minutes a few times a week. Over six months, I dropped from a size 16 to a 12. I ran my first non-stop 5K, then started running 10Ks. I got strong enough to do full pushups.

After a year, I set my sights on developing more strength, so, turning to Instagram again, I signed up for Kelsey Wells’ PWR program.

I started using free weights and challenging myself in a new way. After just a few weeks of strength training, I was lifting heavier and feeling stronger, especially in my upper body.

For a while, I was doing three of the 4×7 minute BBG circuits each week, in addition to running or playing netball for 30 minutes, three times a week.

Now that I’ve started the PWR strength program, my week consists of three to five days of resistance training, and two to three days of LISS (lower-intensity steady state cardio) and HIIT.

The hardest thing for me is knowing when to actually rest. I’m always grappling with the fear that if I stop being as consistent, I’ll end up back at square one. Feeling like I need to take a rest day sends me into an immediate panic that I’m sliding down that slippery slope back into bad habits. But that’s something I’m working on, because rest is super important.

Winner winner chicken…lunch? ?? best lunch I’ve had all week AND I crept in under 500kcals ? because I’m so busy at the moment I rely on meals I can throw together fairy easily ?? for me a combo of cooked chicken and veggies out the fridge works perfectly and tastes yummo ? in the post lunch slump now but firing myself up with a Diet Coke ready to crank out some work before jabs (ick ?) and gym (yay ?) later ? . . . . #bbg #bbggirl #pwr #bbguk #bbgcommunity #healthyeating #workout #gym #run #runnersofinstagram #running #weightloss #fatloss #fitness #fitfam #fitspo #motivation #fitnessjourney #fattofit #bikinibody #girlgains #strongnotskinny #healthylifestyle #sweat #dedication #healthymeal #bodypositivity #yum #mealprep #salad

I used to have a very difficult relationship with food. I loved eating unhealthy foods, especially during tough periods in my life. At the same time, I hated myself for indulging because I knew what it was doing to my health.

Now I embrace a balance. I use MyFitnessPal to track my overall calorie intake, but I don’t have things that are off limits since the restriction is mentally too negative for me.

My only real rule is I try and keep my meals fresh and simple (as well as quick to make). The minute things get complicated, I know I’ll be tempted to forget it and break from my plan.

I eat whatever I fancy and just try and stick to my overall calorie goal. I always have at least one dinner a week that I won’t track and having that on the horizon means I don’t mind if things get a little monotonous during the week.

Just over a year after setting my original goal to stick with a program for just 12 weeks, the thing that has surprised me the most is that I’m actually still going, still motivated, and still showing improvement! As my journey has gone on, it’s been less about my weight and more about having confidence day-to-day and staying pain free.

I still focus on working on my core strength and it’s literally changed my life. It took a lot of time and consistency, but with a strong core to support my back, I can now play netball, go shopping, run miles—all without pain.

The confidence I’ve gained is something I would never have been able to imagine. It’s so nice to be able to start feeling more comfortable in my skin, and I think it spills over into all aspects of my life. I feel so much surer of myself. I throw myself into activities I’d have never taken part in a year ago. I am getting so much more out of so many aspects of life that I hadn’t even realized I was missing out on.

Physically, the most surprising discovery from this journey is that I can actually run. I’ve gone from not being able to run a mile without stopping, to running 10K in under an hour.

Not feeling your workout today? Do it for the feeling you’ll get when you smash your goal ? honestly this was the highlight of 2017 for me ? achieving something I literally NEVER thought I would OR even could and knowing the hard work paid off ?? . . . . . #bbg #bbggirl #10k #bbguk #bbgcommunity #bbgprogress #workout #gym #run #runner #running #weightloss #fatloss #fitness #fitfam #fitspo #motivation #fitnessjourney #fattofit #bikinibody #girlgains #strongnotskinny #raceday #sweat #dedication #training #progress #nonscalevictory #kaylaitsines #healthylifestyle

Trust consistency. Consistency is what took me from a cycle of trying and failing to achieve results to being where I am now. Don’t let a little slip throw you off track, take a deep breath, look at the bigger picture, and keep on going!