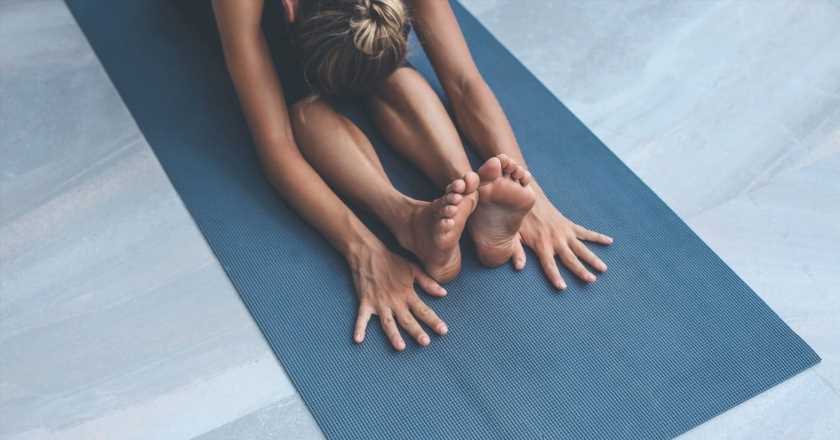 Flexibility, for those who don’t have it, is almost a kind of super-power. But what happens when you’re too flexible? Kat Storr is just one of thousands of women who are hypermobile and it’s taken her years to work out how to move without getting injured.

I’ve always thought I was double-jointed. My ‘party trick’ for as long as I can remember has been to turn my feet backwards into a ballet plié. That often shocked and disgusted people but in general, being super-flexible was seen as a kind of super-power.

After years of really chronic injuries, however, I’ve realised that the reason I’m still able to turn my joints inside out is because I’m hypermobile.

Symptomatic hypermobility, or joint hypermobility syndrome, is when your joints are loose and stretchy because the ligaments attached to them are not as strong and supportive as they should be. Perhaps you’ve heard of Ehlers-Danlos syndrome, which is towards the extreme end of the spectrum.

Stretching: Do these mobility exercises before every workout to avoid injury

My body is a prime example of hypermobility. Physios and personal trainers only need to take one look at my arms, which overextend to the point of almost bowing in the middle, bendy fingers and thumbs, ‘clicky’ hips and loose ankles to see that I have a lot of extra laxity in my joints.

The reason this condition has its own term. The reason it’s not just described as ‘being flexible’ – is because hypermobile people can bend their bodies easily without needing to practice or stretch first.

Jeannie di Bon, a movement therapist and hypermobility specialist, says statistics estimate that 70% of hypermobile people are women. “The role of female hormones plays a part in this, but there is more research required into why this is the case,” she tells Stylist. Puberty, pregnancy and menopause can be triggers for many women for their symptoms to start. It is also thought to be more common in people of African or Asian origin.

I first dislocated my shoulder when I was playing tennis aged 13. I swung my racket to hit the ball, missed quite dramatically, and my shoulder popped out. An ambulance was called and my shoulder was popped back in at hospital while I was sedated with gas and air. I’ve barely picked up a racket since – at no great loss to the tennis world.

Since then, I’ve lost count of the number of times it has dislocated. The most memorable is when it happened when I sneezed while driving. Sadly, since having children, the dislocations have become more regular and my poor husband has had to master a technique for getting it back into place. His services have been required twice in the middle of the night when I’ve dislocated it rolling over in my sleep.

“During pregnancy, our hormones make our tissue more lax, and if you have hypermobility, this will be exacerbated by the pregnancy. Pelvic girdle pain, pelvic floor issues, prolapses and fast deliveries can be common,” says di Bon. I had been in hospital for less than four hours when our first son was born.

Pilates instructor Tessa Clist from Arc Pilates says as well as dislocations and ligament damage, other issues caused by hypermobility include poor posture and an unstable pelvic girdle, which can create lower back and hip pain. Knees, wrists and ankles can also be easily strained or sprained.

“A giveaway that people are hypermobile is that they frequently roll over on their ankles,” she says.

Understanding hypermobility is essential if you want to move safely

Hypermobile people can also lack spatial awareness which can result in poor balance and coordination. They can tire more easily and may experience dizziness from standing in one spot or getting up from a seating position (orthostasis). They may also be more anxious and suffer from sleep and digestion problems.

Not knowing that you are hypermobile – or not knowing how to manage the condition – can cause issues when exercising. Clist says: “Hypermobile people often tend to like to go into a big deep stretch as they won’t always feel it in the same way that a ‘normal’ body would.

“To explain this in a very simple way, this is because the of the imbalance between the collagenous and elastic tissue fibres in the body; they won’t be stretching the right bits to get the stretchy feels they seek and therefore can push it to a point that risks injury to joints.”

Pierre Jason, a sports physio at Pure Sports Medicine in London, has looked after my shoulder for the last few years and says early identification of hypermobility is vital. “Often we will see hypermobility secondary to the ligament damage or dislocation, which automatically increases the chances of recurrence and further degeneration.”

When training and performing in the 1980s, former dancer Helen Pine was often praised for her ‘bendiness’ and flexibility. Of course, now she knows that this was hypermobility and unfortunately the intense dancing took its toll on her body. “No one called it hypermobility then – I’d never even heard of it despite being at one of the top dancing schools in the country.”

Stability, control and strength are crucial

Helen is now a yoga teacher at Blessed in West Sussex but she has problems with her shoulders and ankles and finds it painful to do any weight bearing exercise. “Mentally it’s very hard; I’ve lived an active, fit and healthy lifestyle and hate how weak I’ve become. I can no longer run, surf, ski, paddle-board – all the things I loved and which make me, me.” She hopes the increased awareness of the condition will prevent this happening to other people.

Jason has always emphasised to me the importance of focusing on stability, control and strength. “We tend to discourage stretching to end of range as the range of movement of joints will tend to be excessive already,” he says. And Clist tells her pilates clients they should learn not to lock their elbows and knees and to work within their safe range of motion.

“This can be a problem for the hypermobile body as they might not even realise they are not in their safe range as they are not getting the same proprioceptive feedback to tell them where their limbs are.

“Just because someone can do a big range of movement, it doesn’t mean they should be doing it. We have to assess whether that individual has the control and awareness to avoid injury before we think of big movement ranges,” says di Bon.

Working with a professional to help understand your natural limits

Pilates and yoga are strongly recommended to help with that all-important strength and stability. Clist says that pilates studio equipment such as Reformer, Cadillac or Wundachair can be great for hypermobile people as the springs of the equipment offer support to keep joints in the correct positions and work the muscles properly.

But higher impact and competitive sports are not out of the question. “I see clients able to do all kinds of exercise with hypermobility like hiking, figure skating, skateboarding, cross country skiing, but most importantly they have prepared for it first. I call it building tissue tolerance,” says di Bon.

“Injuries tend to happen with hypermobility when we have not trained our tissues, we tend to lack proprioception, we have little awareness of our body in space and due to joint laxity we often have poor control. We can strain and over-stretch without even realising it. But if we teach these awareness aspects to someone, and that is possible, exercise possibilities open up.”

Keep on moving to avoid arthritis later down the road

Personal trainers can help teach you how to use light weights with low repetitions in a way which will support your joints and not overwork them. Elisabeth Clare, founder of MBST UK which provides pioneering treatment for sports injuries and arthritis, advises using a mirror when training to check that your lines are correct.

Some hypermobile people may find that their arms bend too far back or their shoulders wobble or rise up. “It’s amazing how much we think our body is in a line when actually you look like the slinky dog toy out of Toy Story, all over the place,” she explains.

People who have hypermobility may be at increased risk of arthritis or ligament damage later in life but Clare stresses: “The best way to prevent arthritis is to keep on moving. The worst thing you can do is stop exercising because of hypermobility.”

The key issue with hypermobility is that it affects people in different ways, therefore it is important to be aware of your own body’s limitations. By working with professionals who can guide you towards the right techniques and exercises you will be able to manage the condition and exercise the way you want to.

Build strength at your own speed and within our own limits with our range of expert-led How To videos, over on the Strong Women Training Club.