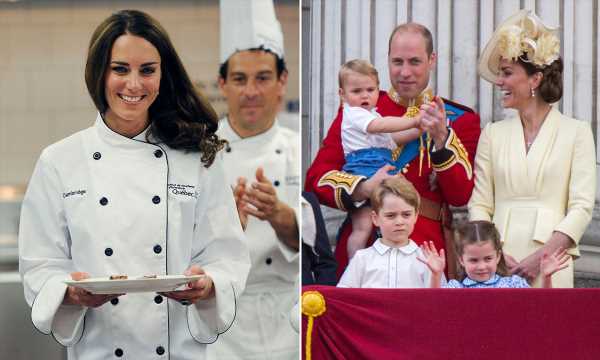 The Duke and Duchess of Cambridge have a jam-packed schedule, juggling royal engagements with parenting their three children Prince George, Princess Charlotte and Prince Louis.

The famous family are known to eat a healthy, nutritious diet of home-cooked meals, but that doesn’t mean the Cambridge clan aren’t partial to the odd treat, carb-heavy meal or sweet snack – just like the rest of us!

Read on to find out what Kate, William and their kids eat in a day…

Mum-of-three Kate is seriously health-conscious when it comes to her morning meal, enjoying dishes such as oatmeal and smoothies.

According to the MailOnline, the Duchess blends a combination of kale, spirulina (a type of algae), matcha (green tea leaves), spinach, romaine, cilantro (coriander leaves) and blueberries together for a healthy morning drink.

While we’re sure William is equally healthy in the morning, the Prince has been known to indulge in a fry up from time to time.

In a 2009 interview with HELLO!, the son of Prince Charles told us how he loved fry-ups, especially with brown sauce! And according to The Sun, William used to tuck into a cooked breakfast in the staff café when he worked as an ambulance pilot in East Anglia.

The Cambridge children opt for a simpler brekkie – cereal, like most children their age.

When mum Kate visited LEYF Stockwell Gardens Nursery and Pre-school in London in January 2020, school manager Michelle Samuels told today.com: “She mentioned to three of the children that her own children enjoy apples and cereal in the morning, which sparked a conversation with the children about their own preference of fruits.”

Duchess Kate kicks off her day with a hearty smoothie

We imagine the Duchess of Cambridge is a salad fan at lunchtime, and according to a past Daily Mail article, we’re right.

The paper reported how the royal is fond of watermelon salads, tabbouleh, ceviche and gazpacho. Kate is also said to prefer meat-free dishes for lunch.

It’s not always health-central though – sometimes Kate and William treat themselves. According to People, the Duke and Duchess were previously spotted enjoying fish and chips on a pier in Fife, Scotland, as they did in their university days.

As for George, Charlotte and Louis, the siblings like to lend a hand in the kitchen and love to make their own pasta and pizza with mum.

People reported that during a visit to Lavender Primary School, Duchess Kate told Matthew Kleiner-Mann: “She was telling us how much her children love cooking and how they cook for her. They made cheesy pasta the other day. One stirs the flour, one puts the milk and butter in. And they make salads and stuff.”

On another visit to St. Luke’s Community Centre, Kate revealed how her three children like making pizza. She said: “I’ve done that with George and Charlotte — making pizza dough. They love it because they can get their hands messy.”

Did you know that Prince William’s favourite cake is a royal favourite called chocolate biscuit cake?

It is known to be one of the Queen‘s favourite afternoon tea snacks and William clearly inherited her sweet tooth as he even requested it at his royal wedding to Kate Middleton in 2011.

Former royal chef Darren McGrady told HELLO!: “When Prince William first tried it, he loved it and then requested it as his groom’s cake.” We bet this tasty-sounding cake is on the table at the Cambridges’ on a Sunday afternoon.

The famous family-of-five like a broad range of foods for their evening meal, particularly homecooked dishes such as roasts.

The Duchess has also spoken of her children’s love of vegetables. While filming with Mary Berry for a TV Christmas special, she divulged: “We’ve got carrots, beans, beetroot – a massive favourite – Louis absolutely loves beetroot.”

William is a fan of steak for supper and spoke about his culinary skills back in 2017, explaining: “I do like cooking, but I’m not very good.”

During his visit to the Royal Institution of Chartered Surveyors, the royal revealed that his signature dish is steak but he struggles to cook it for the right amount of time. “I get really worried about cooking it – I hate over-cooking steak,” he said. “I like it medium-rare, so quite alive.”

The Duke and Duchess often go out to dinner engagements

Spicy curries are said to be Kate’s favourite takeaway order, but William has revealed he’s not very good with hot foods.

Speaking of his go-to Indian, he has said: “Chicken masala, love that, a bit of flavour – I’m not a vindaloo man put it that way.”

And young Charlotte likes curries too… When the Duchess attended a special reception at the Aga Khan Centre in 2019, she said she has to cook several versions of a curry dinner at home to make it suitable for their children.

“It’s so hard cooking curry with the family, though. The children have a portion with no spice, yours is medium,” she said to William. “And I quite like it hot.” She added: “Charlotte is pretty good with heat.”

Make sure you never miss a ROYAL story! Sign up to our newsletter to get all of our celebrity, royal and lifestyle news delivered directly to your inbox.