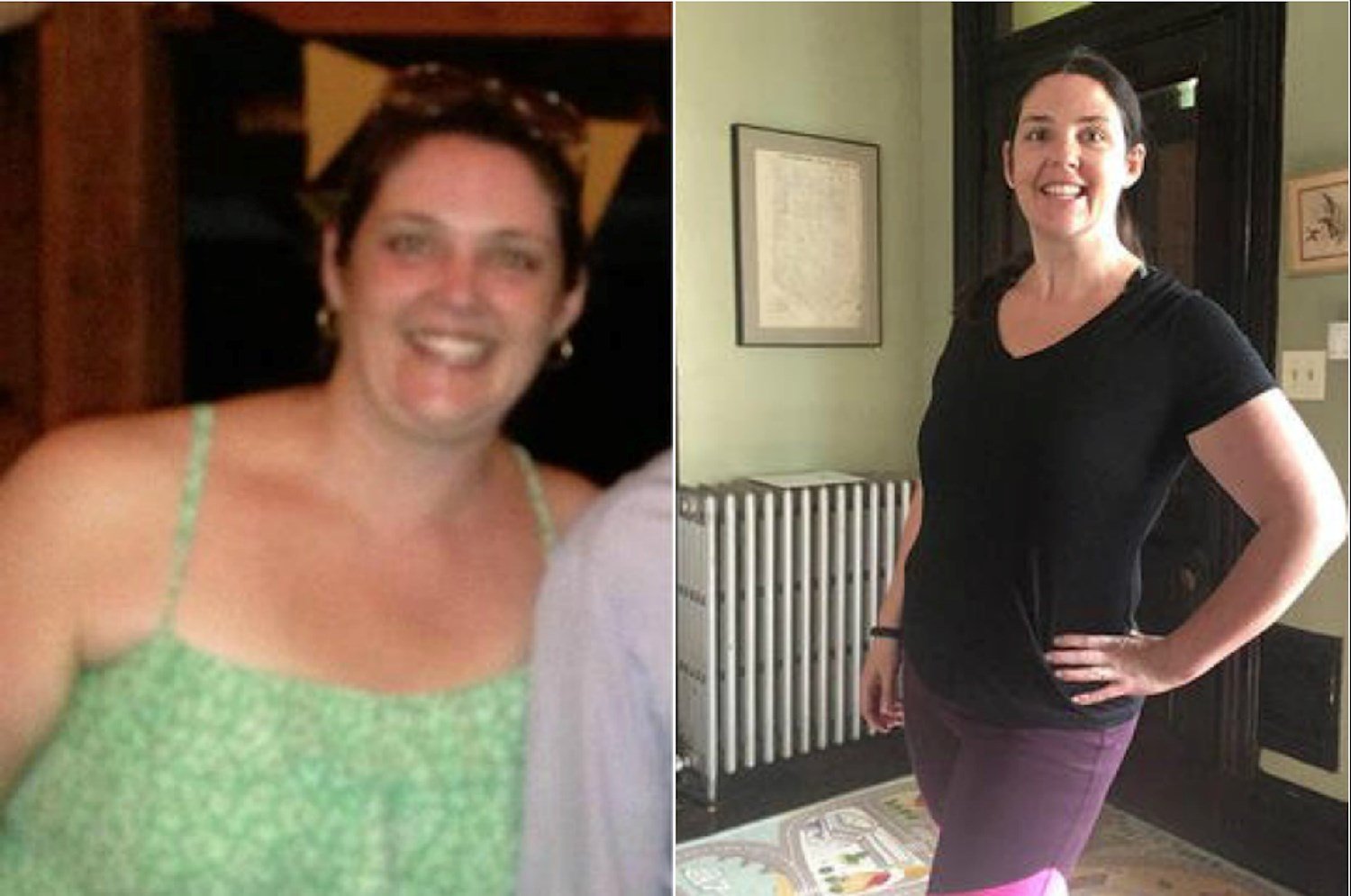 I put on a lot of weight during both of my pregnancies – 27kgs in the first and 18 in the second – and in the four years between those pregnancies, I wasn’t taking care of myself. I was stretched too thin at my job, and was completely burnt out on the work I was doing. I saw exercise as this big thing I had to be perfect at—that I had to have all the right gear and tons of time, so I just didn’t do it. I also didn’t realise how much I was eating. I was really out of tune with my body and not thinking at all about what I was putting in it, even though I was always aware of my weight all the time.

Before I started dieting, I wasn’t an unhealthy eater, I just wasn’t a mindful one. I didn’t give a lot of thought to how the food I was eating was going to make me feel — if it would give me energy or take it away. For example, my breakfast used to be oatmeal or a smoothie, but once I sat down and evaluated the ingredients, I realised my smoothies were clocking in at 700+ calories. In order to make my smoothies healthier, I eliminated the unnecessary and stuck with three to four ingredients.

During my weight loss process I didn’t measure my food or count calories, but I became much more mindful about my portion sizes and included a lot more low-calorie, nutrient-dense foods. I fill up on roasted vegetables (sweet potatoes and red cabbage are my favourites), broccoli tossed in tamari sauce and a little toasted sesame oil, as well as fruits like frozen berries and watermelon. To cut down on portions I began by cutting my carb portions in half, and now I often just eat vegetables.

I also started to eat breakfast later, around 10 a.m., which worked well for me because before, I’d be hungry for lunch by 11 a.m. and then spend the whole afternoon snacking. Now, I eat more protein at lunch, such as tuna over salad with yogurt-based dressings and quinoa and beans, as opposed to leftover takeout from dinner the night before. And instead of a huge afternoon snack, I began having a few chocolate-covered almonds to tide me over. For dinner, I have quinoa or a little rice with a bunch of vegetables and fish. Salmon with a sauce of fresh orange juice and miso is a favourite. I don’t love meat, so I stuck to mostly plant-based proteins when not eating fish. I still have ice cream as a treat once in a while, but often I’ll grab a bowl of frozen cherries and snack on those which totally satisfies me.

Once I started eating healthier, I also got in the routine of exercising two times per week and made it a non-negotiable on my calendar. The gym I went to had a policy where you signed up for classes in advance, and I never wanted to lose my money by not showing up. I started with Tabata classes at my highest weight. The classes mixed bursts of cardio (which seemed more doable) with strength training like kettle bell raises (perfect for building up strength to carry my baby up and down the stairs all day). After about four months of doing that two to three times per week, I lost about 9kgs. At that point, I felt comfortable running again, so I went to classes two times per week and ran one or two times per week. After six months of running and Tabata classes, as well as the changes to my diet, I was down another 13kgs.

These days, my schedule has changed, so my exercise is to move as much as possible naturally during the day, and to run two to three times per week. My runs are two and a half to three miles long and take me about 30 to 40 minutes. I formed a running club with my friends, and we try to meet once a week to walk/run (or as we joke, “shuffle”) at a local park. I also use a Fitbit to track my movement. I found that on days I was working at my computer, it was a challenge to even get 5,000 steps unless I went running. Knowing how little I was moving meant I would get out of my chair for breaks just to walk around, or even spend 10 minutes tidying up the house — it all adds up!

Fitting in exercise as a mum is really hard. I have found the number one way to fit it in is through commuting. I started bike-commuting once I started my health coaching business, and I also run, bike, or walk to pick my kids up from school, go to the library, and run errands. I’ve even been known to go grocery shopping with an empty jogging stroller I fill up with food and run home! Also, having a running buddy to hold me accountable was hugely helpful when I was starting out. It helped with getting outside during the winter months. This has helped me maintain my 22kg weight loss for almost six months now.

One of the biggest rewards has been being able to keep up with my family — we run, bike, and walk everywhere together. I could do those things in the past, but I was always struggling to keep up and would often dread it. Now, I look forward to it. I can also carry both my kids up and down the stairs without getting winded and spend more time on the floor playing with my kids. That’s where the step tracker has also helped. Toward the end of the day, instead of sitting on the couch, often I will challenge my son to races to get closer to my step goal.

Figure out what you like (or at least can tolerate) at the beginning with both food and exercise. Look at what you did as a kid that you liked, or what things have led to success in the past. I needed accountability through signing up for classes and being told what to do or I wasn’t going to do it. Nowadays, running is absolutely a habit for me, but I needed that extra push early on. Beyond that, know that it takes some time and trial and error. But it’s all worth it in the end.