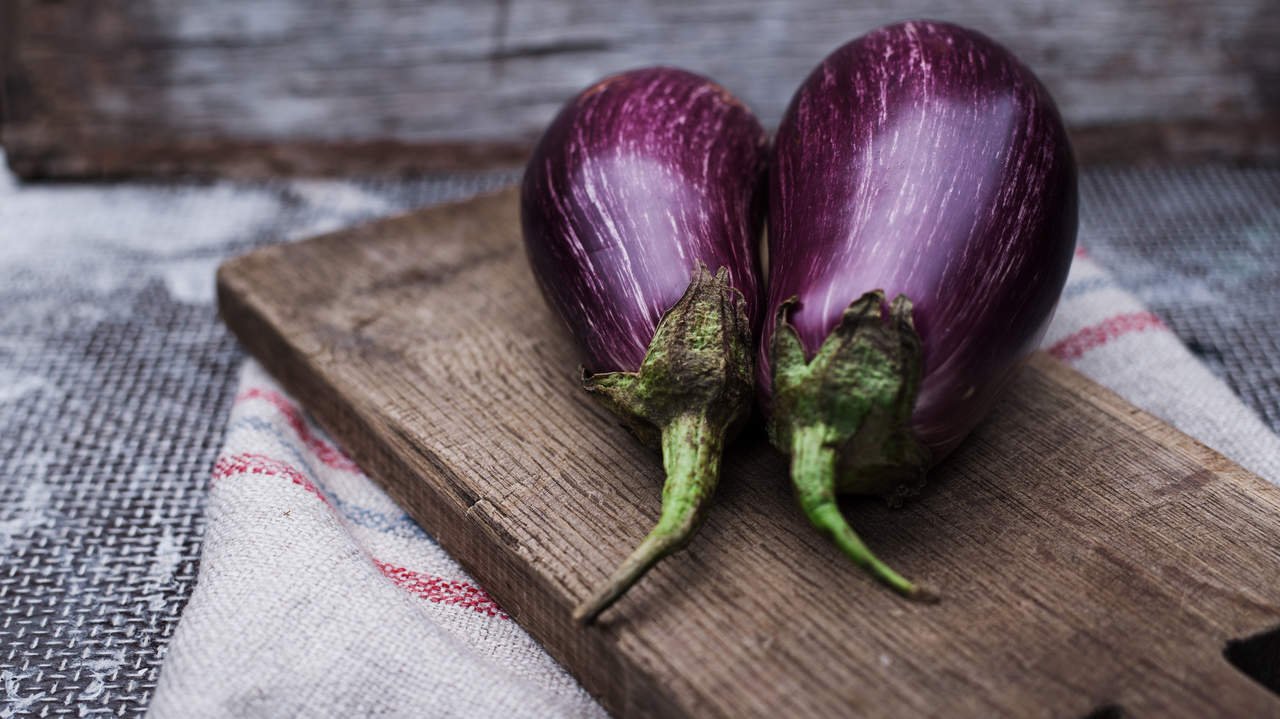 If you first encountered eggplant as a child and loathed it, your juvenile palate arguably needs an adult corrective. Mushy, with a purple skin, and likely folded into middling pasta salad or baked into an ill-advised casserole, it’s a food that can be done oh-so-wrong.

But once you wrap your head around its potential—once you’ve tasted it fried so perfectly it’s silky, or roasted till velvety—you may not be able to get enough of it. As Raquel Pelzel writes in her excellent short cookbook Eggplant, “It’s the tofu of the produce aisle.” That’s how accommodating it is to various types of cooking and to a wild variety of spices and foods from around the globe.

Once you start investigating eggplant at the farmer’s market—in much of America, now is the time to look for it—you’ll spy it cloaked in royal purple, pure white, and bright orange. You’ll see the often bitter Thai eggplant, the sweeter, slim Chinese eggplants, and sweet, often-striped fairytale eggplants. The popular globe eggplant is still a great one to seek out, but consider the farm stand over the grocery store: Your odds of getting a younger, less bitter eggplant are better.

No matter the type your recipe (or craving) requires, look for eggplant with taut, glossy, smooth skin that isn’t mushy, opaque, mottled or wrinkled. Store it in a cool, dry place, suggests The Food Lover’s Companion. (I tend to leave mine on the counter in the shade and use it ASAP.) If you must wait a day or two, stash it in the crisper for a couple of days, but know that it will lose its robust qualities as it sits there. The eggplant is sibling to the tomato, after all; it is delicate.

Marcella Hazan, queen of Italian cookery, says you must salt eggplant before cooking. “As a preliminary to most recipes,” she writes somewhat severely in Essentials of Classic Italian Cooking, “you must purge eggplant of its harshness, which on occasion can be considerable.” Some would agree that salting fat slices generously, placing them in a colander for at least half an hour, and then rinsing them—or at least drying them, depending on your salt tolerance—will get rid of acrid flavors. Others disagree. Yet others, such as Pelzel, suggest that “what [salting] does do is collapse the cellular structure in eggplant by releasing some of the water trapped in the flesh.” The result is eggplant that may absorb less oil and release less liquid, making it less greasy after frying.

All the ways the world loves to cook eggplant

The fruit—it is technically a berry—is beloved around the world. You’ll see it peppering Chinese, Israeli, Indian, French, Lebanese and Italian cuisines, among many others. When roasted, fried or broiled correctly, eggplant has a texture that can’t be beat: It’s like eating velvet.

If you’re giving it a whirl for the first time, consider Indian eggplant in a “North-South sauce,” from doyenne Madhur Jaffrey. It employs only a small amount of oil, plus killer North and South Indian flavors such as nigella, fennel, mustard and cumin seeds. The dish can be served room temperature, so it’s ideal for a picnic.

Many Sichuan restaurants will have eggplant lurking somewhere on the menu, and if you’re lucky, one of the options will be “fish-fragrant eggplant.” As Fuchsia Dunlop writes in her excellent cookbook Every Grain of Rice: Simple Chinese Home Cooking, “This dish, almost more than any other, expresses for me the gorgeous layering of flavors that is the signature of Sichuanese cooking.” Though it is purely vegetarian and contains neither fish nor fish sauce, it comprises plush little batons of fried eggplant spiked with chiles, garlic, ginger, and spring onions. It is lightly sweet, lightly sour, and simple to make it home.

Vegetarians would be right to laud eggplants for their “meatiness” just as they do mushrooms. In Deborah Madison’s seminal 1987 veggie cookbook The Greens Cookbook (which also contains an excellent black bean chili recipe), she swirls eggplant with saffron custard for a gratin, roasts it for soups, slices rounds of it on to pizzas, and even adds it to vegetable stocks for its “soft, meaty flavor.”

As every lover of eggplant Parm knows, the fruit is a star player in Italian cuisine. Whether it’s fried, baked with mozzarella, or turned into sauce with tomato and red chili, as it is in Hazan’s cookbook, it is incredible when matched with its sibling, tomato. Pasta alla Norma is an iconic Sicilian treatment in which the eggplant is fried, spun with pasta and tomatoes, and simply garnished with ricotta salata. (This recipe is a great one.)

Classic techniques are updated beautifully by Jessica Battilana in her new book Repertoire: All the Recipes You Need. Her recipe for “New Eggplant Parm” is neither mushy nor pasta-centric, but relies on fat ½-inch slices of eggplant crisply fried, topped with mozz, and served alongside a gorgeous mess of garlicky cherry tomatoes.

One of my very favorite recipes, which I set aside a summer Sunday to cook every year, is Francis Lam’s “weapons-grade ratatouille.” Yes, you can make this dish in your Instant Pot or find some quick shortcut recipe, but I’d argue that you can’t coax all the sweet, jammy summeriness out of squash, eggplant and tomatoes unless you spend some quality time with them. Do take Lam’s advice and set aside a jar for the dead of winter; slathered on a baguette with goat cheese, it’ll be the best Valentine’s Day present you’ll ever give yourself.

The dish with perhaps the best record of converting eggplant haters is one with a kaleidoscope of heritages: baba ghanouj. Israeli, Lebanese, Palestinian, and Syrian, it is a simple, sultry mess of eggplant, tahini, garlic, and lemon juice. Making it is a delight, and if you have a grill on, you can throw a fat eggplant on there and make the whole process even quicker. Here is Raquel Pelzel’s recipe, which might be able to change the mind of anyone lingering on the eggplant fence.

Baba ghanouj is a vagabond of a dish, as much Israeli as it is Lebanese, Syrian or Palestinian. Salam, a restaurant on Chicago’s far North Side, has undergone a slick renovation since I lived in Chicago 20 years ago, but it was once a hole in the wall with the best falafel, hummus and baba. My dad went there religiously for two decades; he was addicted to their foul (a dish of warm Egyptian fava beans, olive oil and garlic) and I went for the baba ghanouj, which was at once garlicky and smoky, creamy and eggplanty. My dad would order and say thanks, shukran, in Arabic and they’d respond bevakasha, you’re welcome, in Hebrew. It was our little slice of delicious and peaceful cohabitation.